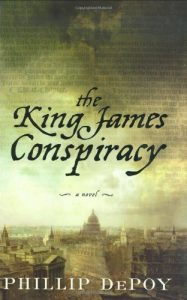 With these cryptic words, a conspiracy is set into motion that threatens the new translation of the Bible ordered by King James I, and the lives of the scholars working on it.

In 1605, in Cambridge England, a group of scholars brought together to create a definitive English translation of the Bible finds one of its members savagely murdered by unknown hands. Deacon Marbury, the man in charge of this group, seeks outside help to find the murderer, to protect the innocents and their work. But the people who offer to help are not who they claim to be and the man they send to Marbury—Brother Timon—has a secret past, much blood on his hands, and is an agent for those forces that wish to halt the translation itself.

But as the hidden killer continues his gruesome work, the body count among the scholars continues to rise. Brother Timon is torn between his loyalties and believes an even greater crisis looms as ancient and alarming secrets are revealed—secrets dating back to the earliest days of Christianity that threaten the most basic of its closely held beliefs.

Meeting will be held under the Friends Pavilion (or in the Houghton Room) at the Community Center.
Pre-Registration Required. Group size limited to 12 participants.