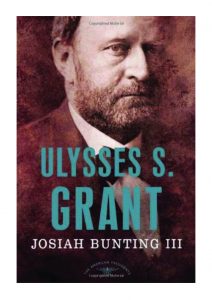 Josiah Bunting III is chairman of the Friends of the National WWII Memorial. In 2016, he completed a 12-year tenure as President of The Harry Frank Guggenheim Foundation. His administrative experience in higher education includes: President, Briarcliff College (1973-1977); President, Hampden-Sydney College (1977-1987); and Superintendent, VMI (1995-2003). During active duty with the United States Army, he served as an infantry officer in Vietnam with the Ninth Infantry Division. General Bunting is the author of several books, including a biography written for Arthur Schlesinger’s presidential series on Ulysses S. Grant. As a general, Ulysses S. Grant is routinely described as the man who turned the tide of the Civil War, and who showed vision and magnanimity at Appomattox. But the most common word associated with his presidency is “scandal.” Grant is routinely portrayed as a man out of his depth, whose trusting nature and hands-off management style opened the federal coffers to unprecedented plunder. But that caricature does not do justice to the realities of Grant’s term in office, as Josiah Bunting III shows in this provocative assessment of our eighteenth president.