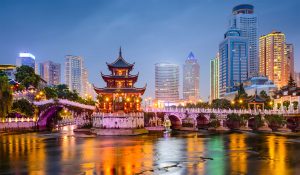 Day 1 of our Global Issues 2019 Symposium – China: Its History, Culture, and Place in the World Today

How The Past Helps Shape China’s Push for Global Power

Auditorium is SOLD OUT!  You can still purchase a ticket to the Simulcast (in the Woman’s Club Room) for $15 by calling the office.

Howard French is a career foreign correspondent and global affairs writer and the author of five books, including his most recent non-fiction book, Everything Under the Heavens: How the Past Helps Shape China’s Push for Global Power. Published in March 2017, it was widely reviewed and featured by The Guardian and other publications as one of its notable books of the season.

Traditional Culture and the Impact of “Belt and Road”

Anthony Kuhn is NPR’s correspondent based in Beijing, covering the great diversity of Asia’s countries and cultures. Throughout his coverage he has taken an interest in China’s rich traditional culture and its impact on today’s culture. He has recorded the sonic calling cards of itinerant merchants in Beijing’s back alleys and the descendants of Tang Dynasty court musicians. He has profiled petitioners and rights lawyers struggling for justice, and educational reformers striving to change the way Chinese think. China is five years into a massive initiative called “Belt and Road,” referring to the Silk Road Economic Belt and the 21st Century Maritime Silk Road, two international investment strategies that evoke China’s historical connections with the western world to promote economic cooperation across Asia. Anthony Kuhn will take a closer look at the trillion-dollar foreign policy framework, which spans dozens of countries.

The Music of China – Gao Hong: Master of the Chinese Pipa

Master of the Chinese pipa (lute), Gao Hong is an award-winning musician and composer. She began her career as a professional musician at age 12 and graduated with honors from the Central Conservatory of Music in Beijing. Gao has performed as a soloist and with symphony orchestras, jazz musicians and musicians from other cultures, on every continent but Africa and Antartica. As a composer she has received two Global Music awards and commissions from numerous organizations. In this concert, Gao Hong will perform music from the different regions of China, as well as her autobiographical composition, Flying Dragon. China’s foremost music publication, People’s Music, wrote of Gao Hong that, “like the famous Luoyang peony, she has gradually emerged as the best of all beautiful flowers…her performance has extremely strong artistic appeal and belongs under the category of ‘fine wine’…the more you listen, the more beautiful it gets…”