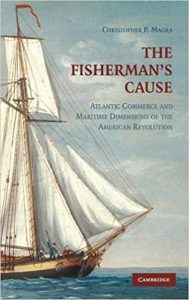 Something Is Fishy In New England

Chris Magra is a critically acclaimed author and an award-winning teacher. He has published two books with Cambridge University Press on the maritime dimensions of the American Revolution. He has written articles for several academic journals, including the International Review of Social History and the New England Quarterly. In his book, The Fisherman’s Cause, Magra examines the connections between the commercial fishing industry in colonial America and the American Revolution. The fishing industry connected colonial producers to transatlantic markets in the Iberian Peninsula and the West Indies. Parliament’s coercive regulation of this branch of colonial maritime commerce contributed to colonists’ willingness to engage in a variety of revolutionary activities. Colonists then used the sea to resist British authority. Fish merchants converted transatlantic trade routes into military supply lines, and they transformed fishing vessels into warships. Fishermen armed and manned the first American Navy, served in the first Coast Guard units, and fought on privateers. These maritime activities helped secure American independence.

Symposium Pricing: includes admission to all seven lectures, and choice between Wednesday or Friday entertainment.