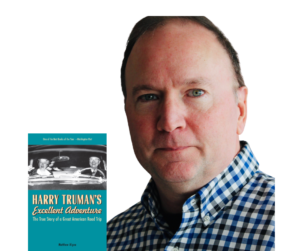 Matthew Algeo recounts the amazing journey of a former president and his wife and their amusing, failed attempts to keep a low profile. In the summer of 1953, just five months after leaving the White House, Harry and Bess Truman drove themselves back East to visit their daughter Margaret. Diners, bellhops, and cabbies shouted out “Hiya, Harry!” whenever they recognized the former president. Along the way there are brief detours into topics such as the postwar American auto industry, McCarthyism, the development of the nation’s highway system, and the decline of Main Street America. By the end of the 2,500-mile journey, you will have a new and heartfelt appreciation for America’s last citizen-president.

Matthew is an award-winning journalist and author. He has reported from four continents, and his stories have appeared on some of the most popular public radio programs in the United States.

Sponsors will enjoy preferred seating in the auditorium and a private party afterward at the sponsor reception.

Sponsorship opportunities are currently available by calling the office, (941) 964-0827.