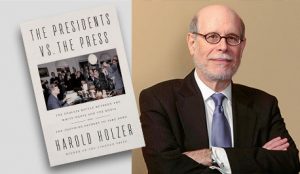 Abraham Lincoln and The Power of The Press
Harold Holzer, Author and co-chairman of The Lincoln Forum
Wednesday, March 10 | 3:30pm | Livestream Event

Harold Holzer, winner of the 2015 Gilder-Lehrman Lincoln Prize, is one of the country’s leading authorities on Abraham Lincoln and the political culture of the Civil War era. A prolific writer and lecturer, and frequent guest on television, Holzer served for six years (2010 – 2016) as Chairman of The Lincoln Bicentennial Foundation. In his book, The Presidents vs. The Press, Holzer examines the dual rise of the American presidency and the media that shaped it. From Washington to Trump, he chronicles the disputes and distrust between these core institutions that define the United States of America, revealing that the essence of their confrontation is built into the fabric of the nation.